CWEA member update: We recently spoke with our Water Environment Federation (WEF) liaisons and learned the Water Environment Research Foundation and two Federal agencies have active research investigations into this topic, including understanding the impact on workers. They will be releasing updates this year.

Federal agencies will also participate in special WEFTEC sessions about bioterrorism and antibiotic resistance in wastewater. The sessions are #201 Bioterrorism: Emerging Issues on Bio-Contaminated Wastewater and #411 Public Health in the Headlines. WEFTEC is in New Orleans this year.

In addition, the University of Arizona is completing a study and will release findings soon. The California Association of Sanitation Agencies (CASA) shared with us they are monitoring all of the studies and will provide updates in the coming months. 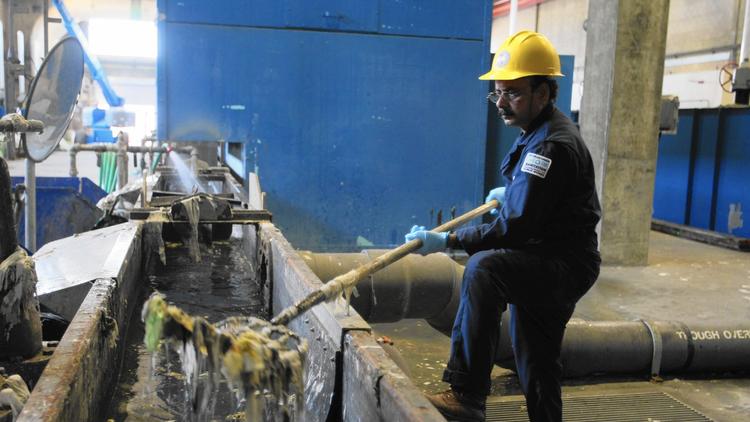 The malodorous muck flows miles to one of the region’s sewage plants, where it is treated with the rest of the area’s waste and then released as clear water into a stream or directly to the Pacific.

Scientists at the Environmental Protection Agency recently announced they had discovered a lethal superbug — the same one that caused outbreaks at UCLA and two other Los Angeles-area hospitals — in sewage at one of those plants. They declined to name the facility.

EPA scientists did not test treated wastewater flowing out of the plant to determine whether it still contained CRE, or carbapenem-resistant enterobacteriaceae.

But a growing number of studies show sewage plants can’t kill the superbugs. Instead the facilities serve as “a luxury hotel” for drug-resistant bacteria, a place where they thrive and grow stronger, said Pedro Alvarez, a professor of environmental engineering at Rice University, one of the scientists studying the problem.

Alvarez and other researchers say the failure of sewage plants to eliminate the dangerous bacteria is one way they may be spreading from hospitals to the environment.

“Chlorine is just not doing it,” Alvarez said of the treatment used by most plants.

The fear is that healthy people otherwise not at risk from the bacteria — including swimmers at the beach — could be infected.

Already officials are worried about the surprising number of people sickened with CRE who have not recently visited a medical facility: 8%, according to an October study.

Hospitals are not breaking laws by releasing the sewage. Laws regulate the overall level of disease-causing bacteria in the nation’s surface waters, but there is no specific regulation of bacteria resistant to antibiotics.

Deemed the “nightmare bacteria” by federal officials, CRE survives nearly all antibiotics. It kills as many as half its victims.

Government officials, including those at the federal Centers for Disease Control and Prevention, say they are monitoring the wastewater studies but have so far made no recommendations to hospitals about the treatment of sewage that may harbor CRE.

“The prevention and control of CRE is an evolving process,” said Melissa Brower, an agency spokeswoman. “CDC will continue to assess the appropriateness of this as new information becomes available.”

Researchers have tried for years to raise the alarm about hospital sewage. The sludge includes not just waste from patients suffering from drug-resistant infections but also high levels of antibiotics prescribed to treat them.

As the sewage mixes, the antibiotics kill off weaker bacteria, leaving the more lethal ones to thrive. The bugs reproduce rapidly, and different species can swap genes, transferring their ability to withstand the drugs.

Last year, the nation’s treatment plants were alerted to the risks of untreated medical sewage when a few American hospitals began caring for patients who had been struck by Ebola in Africa.

The CDC directed hospitals to allow the Ebola patients to use the toilets in their rooms, but said sewer workers should wear protective clothing, including goggles and a face mask, to protect themselves from the highly contagious virus.

Concern about that case prompted a foundation supported by water utilities to study what contaminants, including bacteria, hospitals are releasing in sewage.

“The idea of CRE flowing down our sewer pipes gets me nervous,” said Dr. James McKinnell, an infectious disease expert at the Los Angeles Biomedical Research Institute, who has been working to stop superbugs from spreading. “We should be testing our runoff.”

Inside hospitals, staff go on high alert when a patient tests positive for CRE.

So far at least 75 of the 100 hospitals in Los Angeles, Orange and Ventura counties have reported patients infected with CRE. Los Angeles has the state’s highest rate.

CRE thrives in water. Hospitals have found it living in sink drains. The bacteria are happy in patients’ intestines and it passes through in urine and waste.